I love anything to do with lattices and trellises and decided to look in to their history. They have a long past but I made it brief the best I could. People use lattices, trellises, and trelliages so interchangeably, I was nearly confused myself while researching the subject. Hopefully I haven’t added to the mess, but read on for my take on the subject.

Lattice and Trellis originally started out as garden features.

Something simple like this is a lattice. A lattice is a framework of materials, such as wood and metal strips, in a crisscross pattern.

This is a Trellis. It’s an architectural structure that makes up a framework of lattices to help support climbing plants. But don’t confuse trellis with arbors, which is an open structure with an obvious entryway. Shadow FX has a good blog explaining the difference between pergola, trellis, and arbor.

Before long, lattices were an architectural detail on the exterior of a house.

The restored Pavillon Frais at Versailles via Elle Decor. I remember my jaws dropping at the impeccable details of this house when Elle Decor released this photo. It’s amazing! Although to be honest, that’s not my favorite shade of green, but I’ll let it slide.

And finally, they became an interior architectural feature. They even ended up on wallpapers.

This is a sunroom in Connecticut designed by Ashley Whittaker. I love that the trelliage here takes center stage and everything else compliments it and the room itself. This is so formal and causal at the same time. Also loving how you can find that lattice pattern throughout the sunroom. I think I’d be afraid of overdoing it, but it’s so fantastically done here, you almost miss it. I found this photo via Quintessence. Get the tour of the rest of the house on her blog here.

Let me back up here. We need a little bit of history to explain this trend. 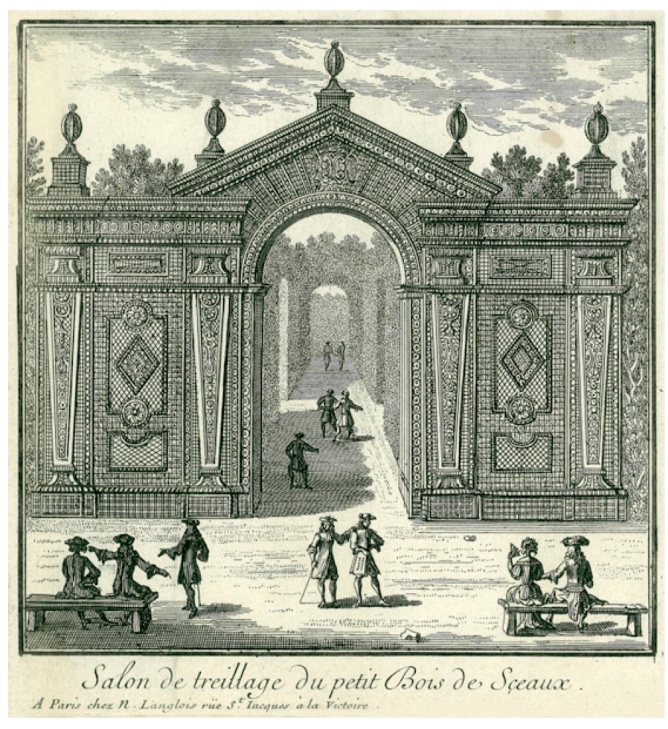 Treillage is a french word for latticework or trellis. Treillages were first invented from countryside gardeners who needed a way to support their growing vines. Popularity grew when King Louis XIV hired an architect to build one for his garden. The photo above is of that garden: the French Garden of Versailles. The House of Appeal has the best extensive history on trelliage that I’ve seen in my research online.

I think at this point, it seems that people began referring lattices and trellis on buildings-indoors or out- as trelliage. Accents of France have excellent examples of trelliages on their website, and they should. It’s part of their expertise, if you’re looking for someone to build you an elaborate trelliage.

William Morris was believed to have first invented the trellis wallpaper in 1864. In the photo above, this was the first wallpaper he designed but the third to be released. This pattern was inspired by the gardens at The Red House, his Arts and Craft Home, but he had his friend Philip Webb draw the birds and the insects. Just from looking at this design, somehow I’m not entirely surprised to learn that he inspired the Arts and Crafts Movement(1850-1900).

The Garden Design has a nice post on William Morris’ Botany wallpaper, which I like since this whole thing started as a way to bring the outdoors in.

Photo via Living Well, Spending Less. Words to live by. 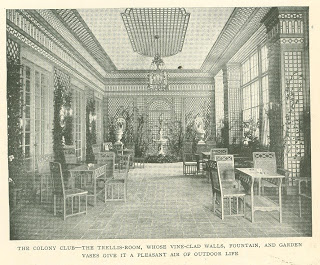 Take a look at the two photos below to see how lattices and trellises have developed in our homes today. I’m not going to go into a whole lot of details about the different types of lattices and trellises we have these days, but in this stunning photo above, that is the simple version of a lattice pattern. Rita Konig did an excellent job of mixing her geometric patterns and I just love how the lattice wallpaper adds a punch to the bathroom. This is an imperial trellis in the photo above and an example of modern day trellis pattern. It is still a trellis in that it interlocks with the lattice pattern, as oppose to being an architectural support.  This is a beautiful entry way by Jessica Walmsley.

Let’s not forget this famous icon in France. (Via Audrey Loves Paris Tumblr) Although I haven’t seen it for myself in person, this symbolic tower has plenty of lattices to go around.

Where would you like to start seeing these patterns?